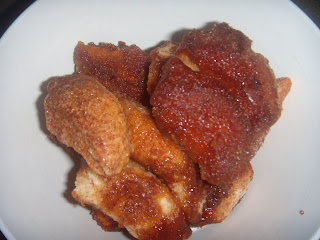 Don't be hatin', I'd share if you were here.

Oh, and if this inspires you to make your own, add a tablespoon of vanilla to the melted butter. I know the recipe doesn't call for it, but trust me on it!

There's one less kid in the house to consume it. Think this pout last night was because he had an idea he'd miss some? 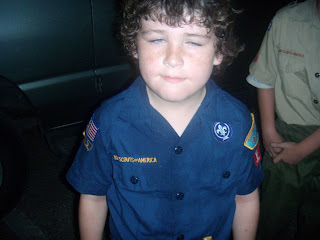 Heat your oven to 350 degrees. Put the sugar and cinnamon into a food storage bag and blend. Cut the biscuits into fours, then toss several at a time in the sugar/cinnamon blend. Place into a well greased loaf or bundt pan. When all are done, spread the remaining sugar/cinnamon blend over the top. Melt the stick of butter and add the vanilla in, then pour over the top of the pan.

Geggie said…
I love Monkey Bread and make it for the little ones in my life whenever I'm visiting with them. (The excuse, of course, is that I'm making it for THEM....yeah, right!)
5:38 PM

Saffa Chick said…
Uh, that sounds somewhere between divine and revolting... maybe it's just too early in the morning for thinking about melted butter LOL!

Back to the fruit salad Saffa Chick!
4:35 PM