September 17, 2008
Somehow, the topic came up in conversation on what's been covered in WFDW and what I make that hasn't been featured. Today's is something we all love, but it's just so time consuming that it only gets trotted out every once in a while.

Manicotti and Stuffed Shells. Oh so good. Oh, what a mess to make! Even doing the cheap solution and using a storage bag to pipe in the filling doesn't work all that well. Someday, I'll break down and get a *real* piping bag and the mess will be confined to just the inside of the bag. My hands and the bag had filling all over them by the time I was done filling the Manicotti tonight. It was worth it, though. 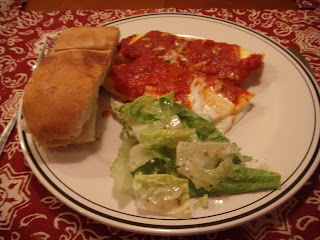 Can I tell you how happy I am that both boys will eat salads now? Ranch, Bleu Cheese or Greek for one, Thousand Island for the other and they'll eat green stuff. Woohoo!

One last thing. We were talking about elbow macaroni last night. Chef asked a question about the different pasta names, and I said when I was a kid, just about everyone I know called pasta either spaghetti or macaroni. He then asked what we would use to make the homemade macaroni and cheese I promised this week, and I said Elbow macaroni.

His mind works in strange ways. He then said that if we're calling them what they look like, then shells should be kneecaps. My comment was to ask "Would you eat something if it was called kneecaps?" The pasta companies needn't think about changing the name-all of us agreed that it wouldn't make us run to the dinner table.
pictures what's for dinner