May 29, 2008
Today, we went to Chef's last cooking class for the year. We've been going non stop since September of 2006 and he wanted a break. His rationale is good-he didn't want cooking class to keep us from doing 'fun stuff' on my day off.

On the way home, my plan was to stop at a different location of a BBQ joint we love, First Choice BBQ. We've frequented the one in Brandon for a while, but I saw that there was one in Plant City. The boys were eager and willing to get Que. It's one of those rare meals that you don't have to twist Gameboy's arm to get. In fact, he'll ask for it.

We were heading through Plant City and a different BBQ place was in front of me. Grandpa Johnson's. Now, in my travels hither and yon, trying to find exactly where in Lakeland or Plant City we'd find a home (ultimately neither), I must have passed this place at least three dozen times.

Each time, I'd either just had something to eat or Mom had tempting vittles waiting for me once I got back to her place. It was on the list of 'places to try'. As we didn't get over to Plant City much, it stayed on the list for a long time. Out of sight, out of mind.

The boys were plied-they were psyched for First Choice. The question was, were they eager for Que from anywhere, or specifically for First Choice? I mentioned that there was a Barbeque restaurant right here, did they want to try it? Chef saw that it was next to a strawberry processing plant and that made his decision. Never mind that we're a couple of months past strawberry season. 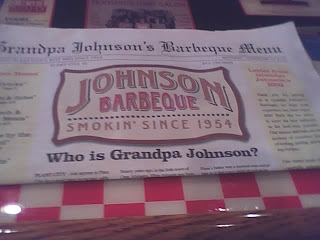 We get out of the car and the smell is intoxicating. Smoke and meat was in the air. This was going to be good. We entered the screen doors and for a moment, I thought this might be a walk up counter where you ate outside. I was wrong.

Inside the glass doors was a nice little restaurant with a take out counter and friendly servers. A young lady (Hill, I later learned) told us we could choose any table and we did. We mentioned that we'd never been before, even though I'd passed it countless times in my house hunting explorations. She told us she'd bring us a sampler plate of their food. COOL!

Chef is no fool-if it's a good Que joint, they're going to have good sweet tea. It is good (though I think Harry's is better). In short order, we've got drinks and an appetizer plate of chopped pork, beef brisket and a cup of their sweet potato souffle, along with two bottle of homemade barbeque sauce.

This stuff is so tender, it didn't need a knife OR the sauce. The smoke flavor is nice and mellow and the pork had that lovely pink ring. It was good to get the sample-I ended up with a sampler platter because both meats were fantastic. Gameboy went for smoked sausage and Chef the brisket. We had an array of sides between us: fries, banana pudding, sweet potato souffle, creamed corn and fried squash. The icing on the cake was the soft sweet roll that was almost like a popover. 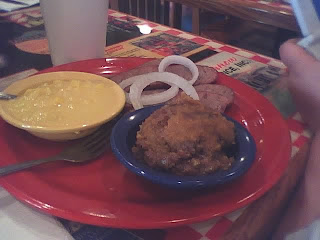 The menus are fashioned as a newspaper, giving you something to read about their history, as well as their offerings. It ends up that this is yet another restaurant from the Johnson family. Locally, they started a buffet restaurant (Buddy Freddys, which they later sold) which is a good down home, southern buffet. They currently own and operate this place and two Fred's restaurants: one we've spied on the south side of Lakeland and another, next door to Grandpa Johnson's. 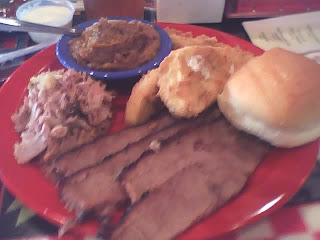 The meal, well, it just drove home the reason why barbeque is best handled by the independent restauranteur. Don't get me wrong-I love me some Smokey Bones or Red Hot and Blue. However, there is something to be said about the family owned and operated barbeque restaurant. Hill mentioned that her brother in law created all the recipes and you know what? The personal touch just makes the food taste better.

My goal for the meal was to have leftovers for the kids for tomorrow night's dinner and there definitely will be a full meal for all of us. I got Ed a chopped pork sandwich with some Collards. (Chef told me "Greens, not Beans for Daddy." LOL) I figured if I came home with good stuff for everyone but him, I was in trouble! The hard part is that I want to snarf Chef's banana pudding. 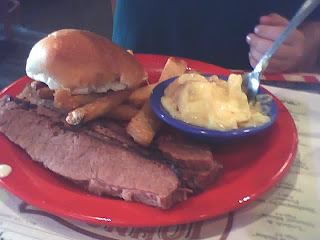 Searching for good food around here has netted another place we'll definitely be going back to for a long time!

good eats pictures Stuff to Do in Florida

Mr.galle said…
Hello, this brog is nice!!
I already link to this page.
If you don't mind. Please link to my blog this URL
http://foodsandfoods.blogspot.com/
12:01 PM