The Monster of Montauk

There are many legends of the weird on the Island that is Long. For years, my peers would joke about the three headed babies that would occur if Shoreham nuclear facility ever went online. Later, as my abilities to travel further occurred and a few family trips to the North Fork transpired, stories more fanciful and outrageous were heard.

That ferry over to Plum Island? Did you know they do genetic experiments over there? I heard that at least a half dozen times in trips to Riverhead, Greenport and Montauk. My thinking was that because access to the island was restricted, overactive imaginations made the place out to be more than it really was.

Years later, a favorite author, also from Long Island, fueled the mystery of Plum Island with a book of the same name.

Last week, news of a monster washing up on the shores of Montauk (on the map above, the furthest east of the lower 'fork'. Plum Island is that small island to the east of the upper 'fork'.) It hasn't been identified, but Newsday reports that this is a real animal that washed ashore. 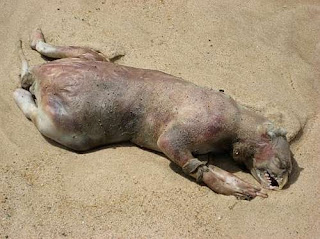 Gee, for years, the biggest worry about swimming locally was the darn jellyfish! That thing looks like it could do far worse damage than a jellyfish ever would.

What about you? Any weirdness that happened in your neck of the woods that made you say "it figures!"rather than "Holy crap!" ?
weirdness

ligirl said…
Hah! So funny you should mention this...just got back from visiting the Island (as you know) and I thought it might have been just a "local" story...it is ALL OVER News 12 and Newsday about this mysterious creature!
9:54 AM

Jennifer S said…
We get a fair number of Bigfoot sightings. :-)

That creature on the beach freaks me out every time I see it.
11:22 AM