December 17, 2007
Tonight at our scout meeting, we had a special guest. The man in red himself took a break from the North Pole! 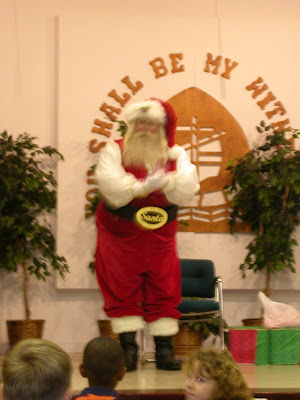 It's pretty neat when Santa addresses all the kids by name, but that's because he's a professional in the business AND is a den leader. 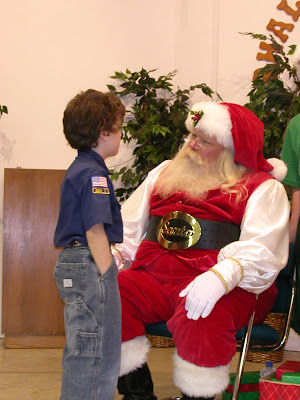 Seconds before this picture was taken, Chef Junior was patiently waiting and singing one of his famous made up songs, "I want a Wii this yeaarrrrrrr" Uh, that's a toughie, kiddo. 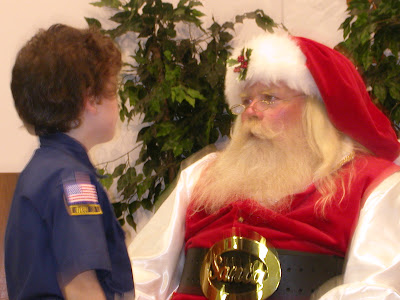 Santa's reaction to Chef Junior's request. Apparently, almost every boy in attendance tonight told him this is what they want. Oh, except for J, our former cub master's son. He asked for cow meat. His sister was teasing him that Santa was going to bring him Butterscotch. See why I like their family? 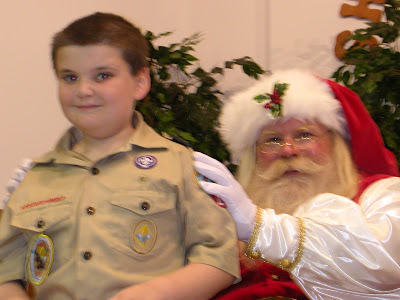 Gameboy is in touch with reality this year. He told Santa that he and his brother would like a Wii, but they know it's hard to get one. Santa, would you bring me a Nintendo DS and one for my brother if you can't give us a Wii? Can you believe it?

Santa gave each child a Pinewood Derby car. Guess part of winter break will be spent designing and executing the designs. Gameboy had a great design last year with a consistent heat time, somewhere in the low 2's (2.35 to 2.38 in four heats, I think). I think he'll go with a similar car this year. Meanwhile, Chef Jr's car couldn't get out of its own way before, let's see if he follows his brother's aerodynamic lead.

It was great to have our meeting AND get the visit with Santa in, too. I'm just wondering if they realized who he was!