Another Day, Another Surgery

December 23, 2009
Six am, Tampa. Checked in and waited and waited and waited. My surgery was scheduled for 9am, but I wasn't even taken back until then! Oh, and because I didn't have pre-admissions testing, the person who came back wanted a sample-after I used the facilities.

Those were the only hiccups, though. Once I got back into pre-surgery, thinks moved quickly. I had a few good laughs, like the fact that the sample was needed to do a pregnancy test! When Ed was ushered back, we had some fun with the pulse/oxygen sensor. (Tapping it makes pretty patterns, lol)

The anethesiologist was a little surprised that I was getting local(but rolled with it) and twice again, I was asked if I worked at the hospital. That's three times in two days, folks. And NO, I am NOT going into the health care field. That requires biology classes, yuck.

I was brought into a freezing surgical suite, and laid prone on the table so they could reach my calf. Instead of local in the manner I had it last time (talking to Dr. J during my whole procedure), this time I was sedated as the vein was stripped. I woke up in recovery and was told two cycles of the blood pressure cuff and I could leave.

Dr. J and Nurse M were dead on. Yesterday, they said I'd be out by noon, the latest 2pm. If my surgery hadn't started an hour late, we would have been walking out the door at noon, minus a third superficial vein in My Stupid Leg (trademark pending). I'm glad that I caught it early, that they got my surgery done ASAP, and that this procedure was a lot easier than the last one.

Now, to schedule both follow up appointments for the same day... 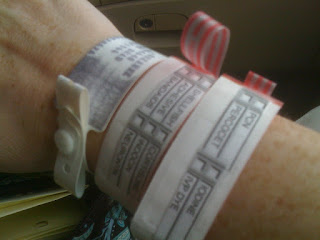 Yes, I have two allergy wrist bands of stuff they might use in a hospital setting. I don't know why the shellfish allergy is on there, though.