June 09, 2011
A while back, I posted Tasty Thursdays on MomDot, the blog of a cool lady, Trisha. It was a win-win, she has some great traffic and nice people who hang around and it helped me focus and write down a bunch of the recipes I've been doing for years.

The recipes I put on MomDot stayed at MomDot. If you look through my archives, there is a post listed for nine months before I really started blogging. It's a link to many (but not all) of the columns I wrote. My thought process was that she'd asked me to write about food to generate traffic and it was important to still do that, KWIM?

A few years later, just four of those original posts still exist. I post a LOT of pictures of the food I make on Facebook. Frequently, a friend or two will ask for the recipes and I'd put them in my notes. However, after three years, it's getting harder to sift through there for the older food postings.

So the time has come to post recipes here. At one time, I didn't do it, thinking I'd save them for applying to Next Food Network Star, but that's not a realistic proposition (take that much time off of school to compete if I even got selected? So not happening.) I can put them here, use the tag "Recipe" and voila, a personal rolodex of the things you can make, too.

The first one is actually a modified Justin Wilson recipe for salad dressing that I adore. I've been making it for over 20 years now and the page from that cookbook is filthy, the mark of a good recipe. I don't really use the cookbook for that recipe anymore, but when I want to look through it, it automatically opens to the original form of this:


Blend together and shake vigorously. As a dressing, this will keep for up to two weeks in the fridge.

As a marinade, the meat should soak in it a minimum of an hour for best results.

We love it on chicken, especially on Shish kebabs. Leftovers make an awesome chicken salad with a little bit of mayo. I like to mince onion and celery in it, too, then serve them on crusty bread. In the near future, there will be an easy soup recipe and I'm wondering how that would do with this chicken.... 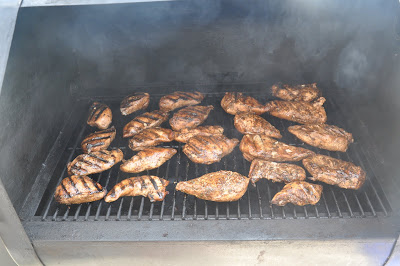 For now, I'll stick to the Thursday recipe thing and see how it works out.