January 05, 2011
Yes, you read that right. After a long hiatus, I'll be doing WFDW again. No pictures this week, but I'll probably take one the next time I make it and add one.

When I make a ham, there are a few tried and true recipes for the leftovers. Homemade macs and cheese with ham, my ultimate comfort food meal of au gratin potatoes with ham chunks and well, that's about it. I've cut off slices and warmed them up, but really, I didn't have anything else. Ed and GameTeen love having that ham in omelets, but Chef and I don't eat those.

What to do with the ham we had in the fridge, that was the question. Ed and I were discussing this and I could tell that he was less than thrilled with the idea of a gratin, since I'd already done the above mentioned macs and cheese and a roast pork lo mein. He wanted something different.

I had the potatoes, so I started thinking. What about making ham hash? (His mom used to make steak hash with leftovers, and it is something he likes) Another point was that growing up, one of my favorite weekend breakfasts would include some of this 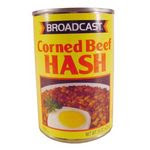 Perhaps it's a good thing that you can't get this brand outside the northeast, because it has something like 2,000 grams of fat per serving. I console myself with a local greasy spoon every few months for a hash fix.

Thinking about ham hash, it could fulfill that craving for the canned good. It'd have that saltiness without all the fat. I diced up about seven potatoes, one large sweet onion and about a cup of spiral sliced ham and sauteed them in a combination of 2 tablespoons of butter, two of olive oil and to a nod to the canned stuff, a tablespoon of lard. It was seasoned with about 2 teaspoons salt, a tablespoon of salt and a tablespoon of onion powder.

Damn, it was good.

Damn, I should have made much more. Three of us made short work of it, even with a big ABC salad (this time romaine, feta, craisins and pecans). I'm really glad I've still got a bunch of potatoes and about 3 cups of ham left to do this again.

It even had me saying "who needs Broadcast?" and those who know me well know that it's not easy to replace that breakfast staple in my book.

Now, how long before I make it again? Probably before next Wednesday, considering the feedback from the other two!

Unknown said…
I remember Broadcast Corned Beef Hash. I even remember seeing commercials on TV? But it has completely disappeared from the Chicagoland area. You can still get it in the NorthEast? Where?
11:03 AM

Suzanne said…
Lou, you still can get it in New York and New Jersey, possibly more places. I usually pick up a can or two when we go. Friends who now live here were bringing me cans from New Jersey before they moved here.
11:09 AM