March 17, 2014
As we had plans to visit Brass Tap Saturday afternoon, we set our sights on lunch within Lakeside Village. Ed suggested trying Burger 21, as we'd been looking at the place when it's been closed for the better part of a year. Who was I to argue with that suggestion?

Thankfully, my sister saw sliders on that awning and she was excited at the prospect of getting mini burgers. I have to admit, the idea of sliders appealed to me, too, because it made it easier to pass off what I don't finish to Ed. (final score: 3 sliders for me, 5 for Ed.)

Right outside the door, there's a sign that has menus in the top. Grab one, because there isn't a menu board inside. Oh, and if you're easily tempted by libations, be warned: they've got plenty of beers on ice right there in front of you. Apparently, they have shakes. I say it, because I was blinded by the beers, but not enough to get one-the plan was to get those at Brass Tap across the parking lot.

We all decided on sliders, Ed opting for the Black and Blue, sis and I going for bacon cheeseburgers. We also got an order of half and half fries, half sweet potato and half original shoestring. In short order, we had a number and found a table.

I ventured back over to the soda machine and then found the condiment bar: thai ketchup, toasted marshmallow, honey mustard, cajun and other sauces are available to top your burgers or dip your fries into. I got the cajun and marshmallow for the fries-and that marshmallow had the right blend of sweet and savory for the sweet potato fries.

The fries showed up first, and the order was HUGE! Three of us did not come close to finishing these, and we'd opted for them because we wanted both types of fries. One of the staff informed us that we can request a large fries half and half. I think we'll do that next time. They were nice and crisp, a light sprinkling of sea salt on both types. The type of fries that may result in me getting just an order of french fries. 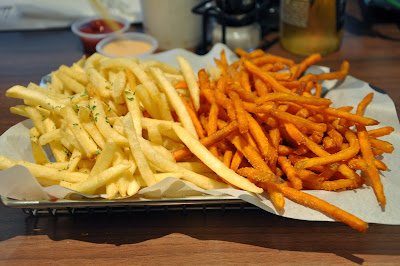 The sliders. It was actually the first time I'd been asked what doneness I'd like for sliders. Nobody ever asks, they assume well done. Not that it's a bad thing when a burger is juicy, but since I got the choice, I opted for medium.

They had a slightly red center, but I like that-it'd probably be better to ask for medium well if you want pink centers on your burgers. They generally put ketchup, mustard and mayo on the, but I requested naked-they did NOT miss those condiments. Lettuce, tomatoes, cheese and applewood bacon on each slider, which are served on Hawaiian rolls.

These were tasty, greasy, messy, perfectly charred bites of deliciousness. 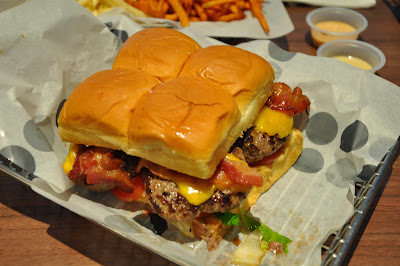 Service was impressive, I think we were visited by each of the staffers working the floor, and each was pleasant, going beyond the 'is everything okay?' school of service and actually asking questions whether it was our first time, where we were from, what brought us in. The manager in me knows why they want to know, but the customer in me just enjoyed the fact that each person asked a question and waited around for an answer.

Based on this experience, I suspect that our usual 9pm jaunt to Brass Tap may now result in leaving the house earlier to grab a burger or some sliders. It's not an S&L Burger, but this place is solid on taste and service.