July 21, 2012
My time spent working in Tampa netted a group of great places to go to lunch, Wright's being one of them. For the first month I worked in Hyde Park, I would come into work on nights I worked closing to find the other managers and DM finishing up a meal from there and thought 'what gives?', because it always seemed to happen on days I wasn't there. 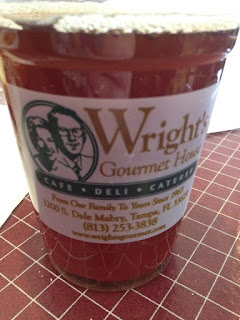 One day, the menu was sitting on the break room table and I looked it over while eating my sub-par lunch. The next day, I had a mission: head to Wright's and get one of their sandwiches. It was worth the trip. I got there, got in a long line (be prepared, lunch hours always have a line) and in about 15 minutes, I had quality deli food, the likes of which I hadn't enjoyed since moving to Florida.

Like a New York deli, they have many named sandwiches, huge round ones loaded with meat, but you can get a half, if you're not that hungry. Each sandwich is prepared to order, so if you want them to switch things out, just ask. 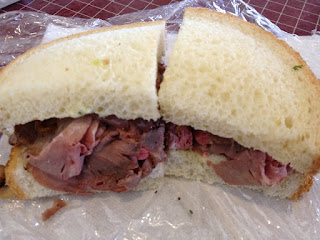 Their Martini is my favorite, but with a twist. I ask for onions instead of the usual mushrooms, and keep the usual (medium-rare) roast beef and creamy herb spread. I think the onions are an improvement. The bread is baked on premises and is round, thanks to a tradition from the war. Tin was scarce, so they'd use the #10 cans as baking pans, something they still do today.

The made to order, gourmet sandwiches are just the start. There's a deli case full of fresh made salads, homemade soup, and decadent desserts, too. I was in luck, because the soup of the day was Manhattan Clam Chowder. I am not a New England style fan, so I had to have it. That soup was awesome, full of large chunks of vegetables and clam in a light tomato broth. It's a winner. Even better, the lady who prepared my sandwich gave me the rest of the onions she sauteed in a little cup and I dumped that into my soup. Wow. 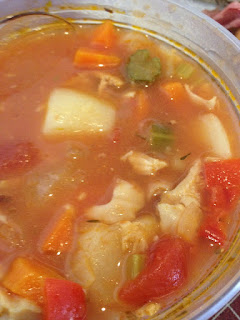 The cakes are great, too, I've had a slice or two in the past. However, yesterday was Chef's birthday and I saw the boxed cakes and decided on the spot to pick up their chocolate peanut butter cake. It was a wise move. Delicious light peanut butter frosting adorned a very moist chocolate Devil's food cake. Chef liked it, so I did good.

If you're in South Tampa, it's lunch time, and you want a decent meal for around $12 bucks, you can't go wrong with a half sandwich, cup or soup and drink from Wright's. Just know that if you get there between 11:30 and 1:30, there will be a line out the door. Don't worry, you'll have your food in less than 15 minutes, on a par with a sit down meal, and the food will be just as good. 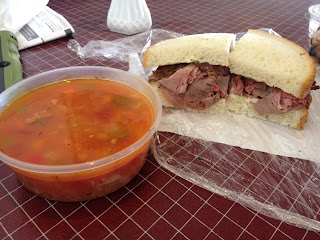