September 28, 2012
After my last manicure with CND's Shellac Black Pool layered with Hotski to Tchotchke got so many rave reviews from the nurses, I thought I'd go with another Black Pool layering effect, but Katie had other plans.

She got in the Gelish line, which means she now has CND, OPI and Gelish. I'd heard some so-so reports on it, but she found that it's been working well-and wanted me to try the magnetic polish. I think the tipping point was that she had some samples to show and a lovely blue, Inseparable Forces.

If you were wondering about the Gelish Magneto colors, it does take a little digging online, as the Nail Harmony page only describes what it does, rather than giving the palette of colors. There are other pages that show six Magneto colors, I've seen three-the plum hue and the blue really caught my eye, and I can't wait to see the green.

Anyway, I was in on trying something different, and in the same amount of time as any of my other gel manicures, I had these: 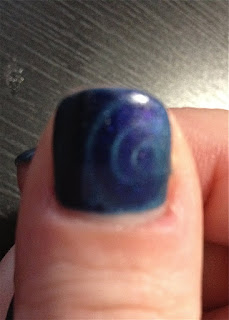 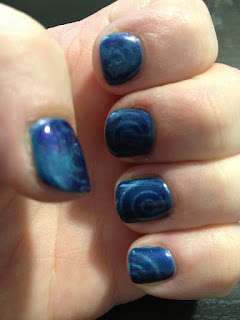 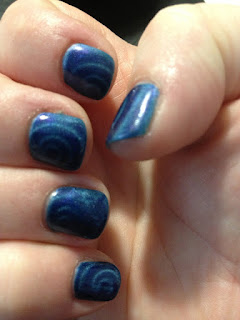 Katie had three magnet shapes, circle, lines and a grid, but there are tons more shapes on eBay if your nail tech carries this line. Once the second coat is on, the magnet is held above the polish for about 10 seconds to achieve the effect. I want to look for hearts and letters, so that I can do "GO USF BULLS" with the green shade eventually!

I will post updates on the wear, as compared to CND and OPIs products. My last manicure of Shellac lasted 3+ weeks and had no signs of flaking, I hope this one lasts the two until I see Katie again, because I really like it. 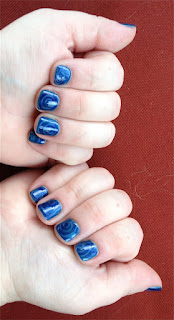