April 07, 2011
This time of year, Ed and I have always taken enjoyment out of sitting on the lanai in the evening, listening to the crickets chirping, relishing the cool breeze and capping the day with a glass of wine.

In our old house in Seffner, we had a pair of Adirondack chairs and a table out on our oddly shaped area. We even strung some tiki inspired party lights around the perimeter and Ed wired a rheostat so that we could have some minimal lighting. I can't tell you how many bottles of wine were consumed while we relaxed and listened to the night sounds.

When we moved into the rental house, our landlord had 'deluxe' sized the builder's lanai, opting instead to have them pour a 20x20 concrete slab and a friend put a simple screen structure up for him. There was room for our old dining table and chairs, plus the chairs we'd had at the old place. While we didn't enjoy it as much as at the first place (probably because we couldn't buy nearly as much wine), there still were many a spring evening where we'd sit and relax.

Then we moved into this house. It was 'mostly ours,' but because the house belonged to Jane, we didn't make changes. No painting, for instance. We'd left the lanai with their table and chairs because Jane still wanted them, but didn't have room. She moved into a place with a much bigger patio and she then requested the table and chairs, but things fell apart far too quickly to accomodate the request.

It's an attractive Disney table paired with some extremely uncomfortable chairs. We stopped our routine of spring and fall evenings, because neither of us could endure sitting in the chairs for very long. On our list of eventual things to do for the house was to get a seating set for the lanai.

After Jane passed, we both realized we'd held back on doing anything to the house, lest Jane be upset by it. Heck, she'd tell us where stuff was-when she lived in the house, forgetting that all the belongings either moved with her or were sold. She never visited the house after moving out, despite being invited several times.

So, for us, the first order of business was transforming the lanai into the area to veg and decompress at day's end. Today, Ed and I worked on constructing the rest of the furniture and I type this from my chaise, enjoying the gentle breeze of a fan and a glass of Riesling. It's so...relaxing. Exactly what we'd hoped.

Maybe I'll even sleep out here. 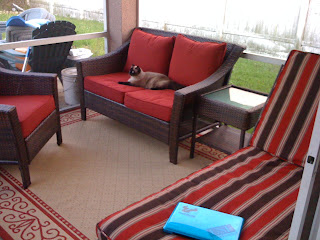